How to Plan a Muslim Wedding the Right Way 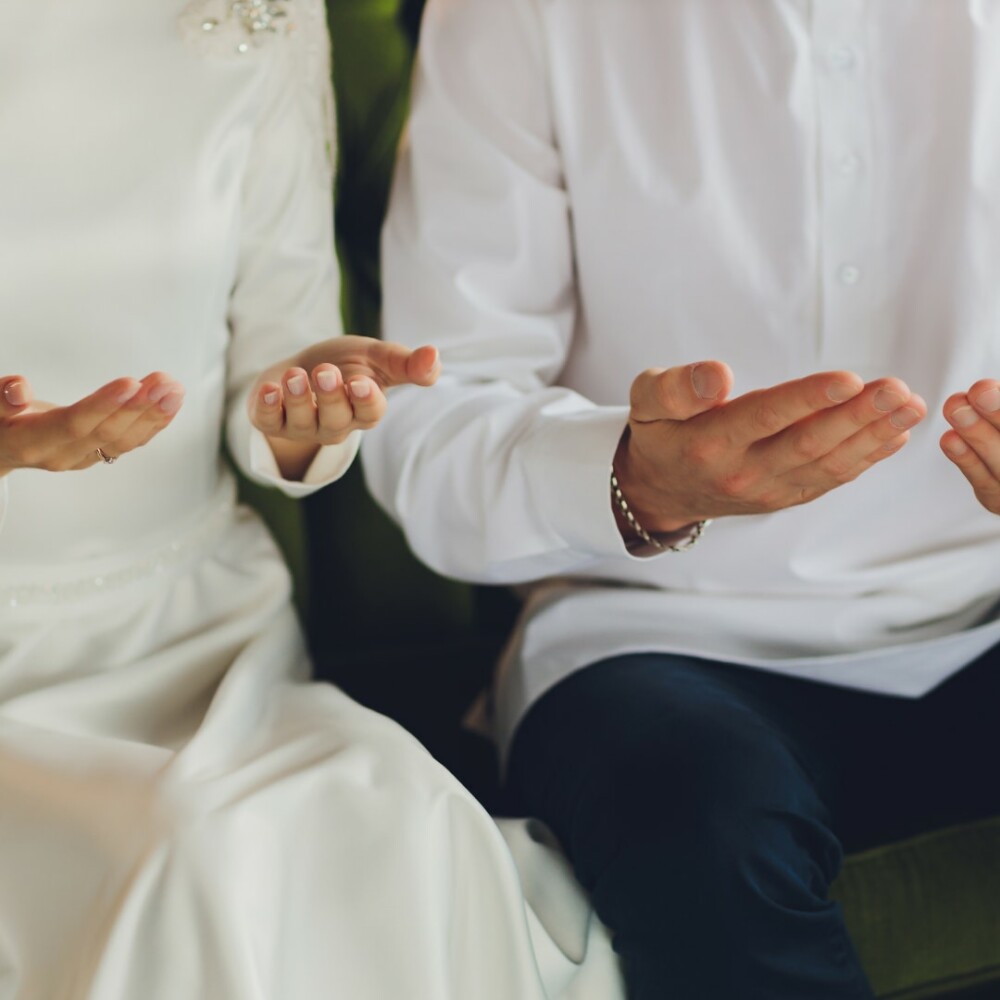 Muslim wedding, or as they are called – “Nikah” (نِكَاح‎) in its Arabian derivation. It means “To combine” or for married partners to find happiness for each other. But under the religion, to Nikah is to “Accept each other, as it is known, and agree to terms and factors that are set”.

And so if you and your partner wish to organize a Muslim wedding which is faithful to the religion, you should follow the rules and the plans in which the Islam religion has set. The religion has established its intention to do so to protect the community and the family institution. This is a wonderful thing, the religion of Islam encourages wedding so that you and your partner may see the benefits which will reflect back onto you as well as the society as a whole.

However, Muslim weddings in Thailand have taken in local traditions that have not been established in the Islamic religion – creating doubt in many partners as they ask themselves “How do I plan a Muslim wedding which is most faithful to my religion?”. My name is Brooke and today I want to show you detailed steps on how to plan a Muslim wedding which is wholely faithful to the religion, they have been organized in an easy-to-understand way. What are the things you should know? Let us take a look.

5 Conditions of a Muslim Wedding 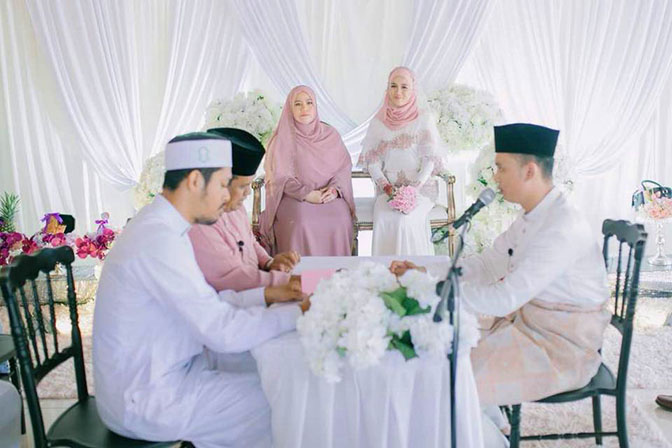 In Islam, a Muslim wedding is whole only when it consists of these 5 conditions:

As you can see, if you and your partner can find a way to merge all 5 conditions into your Nikah, it will be considered a faithful Muslim wedding. It can be said that this is much simpler than it appears.

The proposal is considered the start of the Nikah. When both the bride and the groom decide to wed, the groom will send an elder to do the proposal so that both sides may decide how they want to arrange the Muslim wedding and how will the “Mahr” (the amount of money to be paid by the groom) be settled, as well as the date and the location of the wedding.

The engagement according to Islam will happen when the bride accepts the proposal to marry the groom.

As for this part of the proposal and engagement, there are no ceremonies, unlike the traditional Thai wedding. The engagement parade or even the engagement ring is not allowed by the religion because the Nikah and the Mahr have not been done 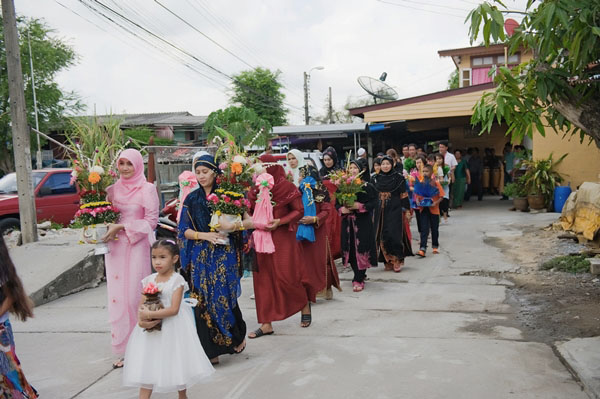 An engagement parade of a Muslim wedding in Thailand that was not set in accordance with the religion.

Once there has been an official engagement, before a Nikah is possible there are conditions that both the prospective bride and groom must follow:

With these conditions, after the engagement, the bride and the groom will not see each other or live under the same roof until the day of the Nikah ceremony. This is why during the Nikah ceremony the bride must wear a concealing wedding dress which leaves only her face and the palms of her hand open. 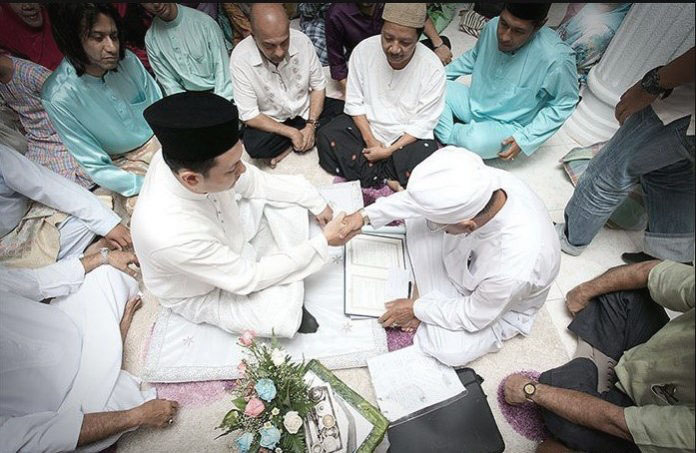 If the Mahr that is agreed upon is more or less than this, the saying must be changed to “With the agreed-upon Mahr” instead. In Islam, the Mahr is usually set at 125 baht – as for the reason why I will explain later on in the article.

And once the ijab from the guardian of the bride has been said, the groom will say his acceptance, the qabul, with the saying down below:

I accept the Nikah with (name of bride) with the Mahr that is set.

That is it. The Muslim wedding ceremony is now finished. It is simple, there is no need to organize a big parade or ceremony, as the saying goes “The happiest Nikah is the Nikah with the least amount spent”.

The next part is the merit banquet, or the “Walima”, which from the perspectives of those outside of Islam will probably look like a feast or an after-wedding party. 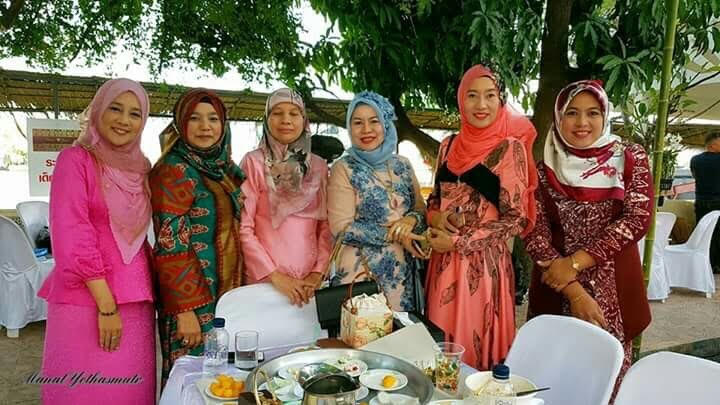 The Walima is a feast after the Muslim wedding ceremony

The Walima means to organize a feast for those who can, it is considered an invitation for the guests to eat together with the bride and the groom.

The principle of the Walima focuses on simplicity without the extravagance. The saying goes “Perform a Walima, even if it is only with a goat”, or even the expression of performing a Walima with only sweets and plums. That is all you need.

Actually, the Walima is optional as it is not enforced in Islam. The religion allows this for those who have enough wealth to do so.

The Walima has its conditions of: Invite all cousins and relatives, invite all those close to home or neighbors and invite all those of the same professions without segregation whether they are rich or poor, or only a selected group of people.

As for the invitation, the host must invite the guests by themselves. In the ceremony, there must be nothing that breaks the commandments such as drinking, playing, dancing, or music. This is different from the Muslim wedding which is not Islam that has brought in Thai traditions that includes playing local music during the Walima.

And if your Muslim guests have received your invitation, they must accept and join your event no matter what unless the ceremony has non-Muslim guests as well. In that case, the invited guest may decide to go or not go to the wedding by themself.

The Principles and Requirements of a “Muslim Wedding”

1. The Bride Price or Mahr 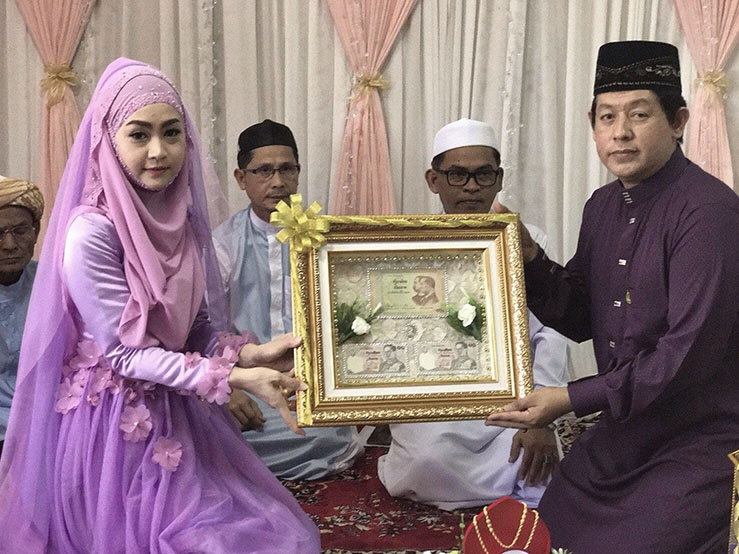 The bride price (Mahr) is the means to marriage. In Islam, it is separated into 2 categories and they are:

The Mahr in the Nikah is a fixed amount that is agreed upon by both sides.

The Mahr that does not have a fixed amount, it is up to the groom to evaluate and give the amount in accordance to the conditions of the person, the family, the position of the person’s career as well as the social status of the bride.

The Mahr which is commonly used in the Nikah is 125 baht because it is the same amount in which the prophet Muhammad gave to his wives. He gave 500 dirhams to his wives, 1 dirham equals a quarter of a baht, and in Thai baht, 500 dirhams will equal to 125 baht.

And for the Mahr to be correct, it must be any kind of asset which is valuable or useful. The amount is not fixed, it depends on the agreement of both sides but it should not be so high that it creates difficulty for the groom in his search for a partner.

2. Wearing the Ring in a “Muslim Wedding” 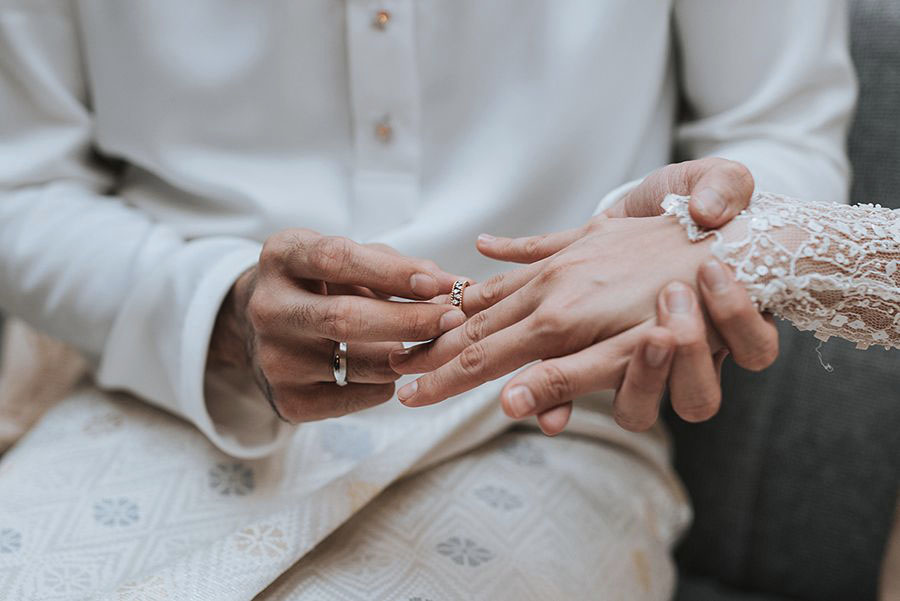 If you wish to wear a ring at a Muslim wedding, you can – the religion does not prohibit this. It is just “an unnecessary thing”. If you think you must do it, you will be bringing requirements out of the religion, which is not faithful to the religion.

If there are rings, the Islam religion prohibits wearing the ring on your index finger and middle finger, therefore you can wear the ring on your ring finger. Other than this, you can also wear an engagement ring as an accessory but you must avoid this act from being one of boastfulness.

If the groom wishes to buy a ring to give as Mahr to his bride, it can be done. There is a saying “Let it be the marriage fee, even if it is a ring made from iron”, this shows us that in Muslim weddings, a wedding ring can be given as Mahr. The religion encourages gifting appropriate Mahr which is simple and not financially problematic later on.

In a Muslim wedding, if only one side of the partnership is Islamic – a cross religion marriage is not possible. Both must have Islam as their religion. One must learn to truly understand the essence of Islam first, if the bride had other religions before, her blood-related parents will not be able to be the “Wali” in the nikah ceremony. Others must be appointed as her guardians instead, the guardians could be the one who taught her the religion or someone she respects.

4. Bringing Other Traditions and Superstitions Into a Muslim Wedding

In planning a truly faithful Muslim wedding, everything must be in accordance with the rules as said above. If other superstitions or traditions are brought in and are viewed as something necessary such as auspiciousness, parades, or parties – they will be things that should not be done. And so the wedding will be a Muslim wedding which is not Islam. 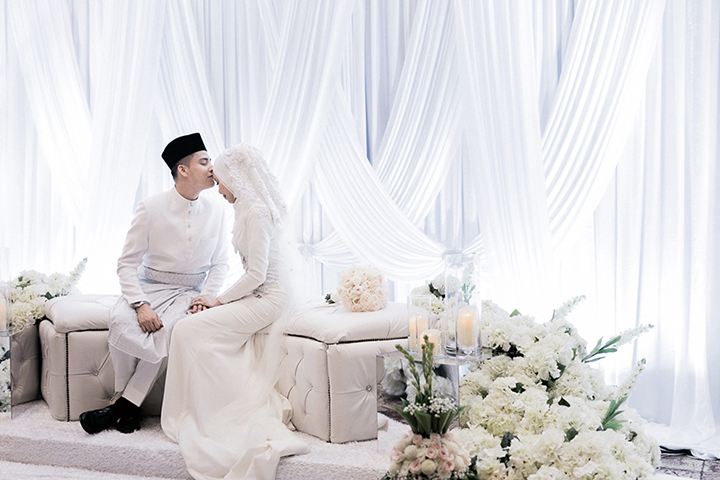 As for the attires of the bride and the groom, there is no need for them to look extravagant. They only need to be faithful to the religion, that is, for the groom, he must wear a form-fitting attire with a long-sleeved shirt and long-legged trousers, he cannot wear red and should wear a hat as a beautiful symbol. This is to be faithful to the principles of Islam.

As for the bride, the only rule is to cover up every part of the body except the face and the palms of the hands.

อ่านต่อ: Wedding dresses: 6 steps to making you the highlight of your wedding

6. Rules for the Guests of a Muslim Wedding 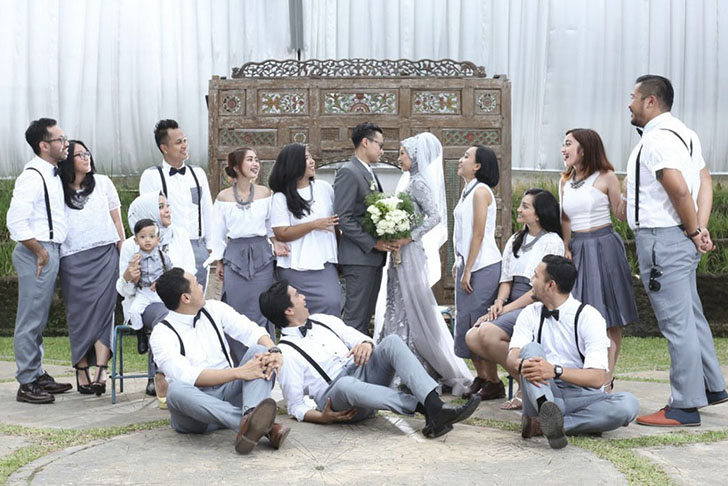 As for this part, I have included additional information as nowadays there are many guests attending Muslim weddings who are not Muslim themself – they may be unsure of what they should do or what they should way. I have the answers as follows: 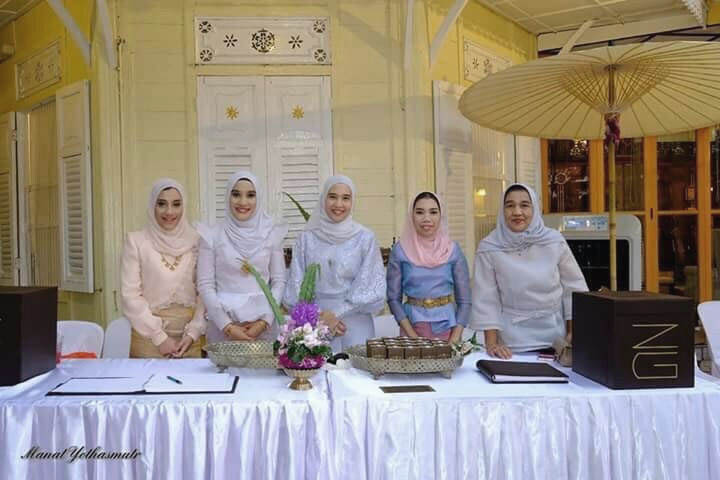 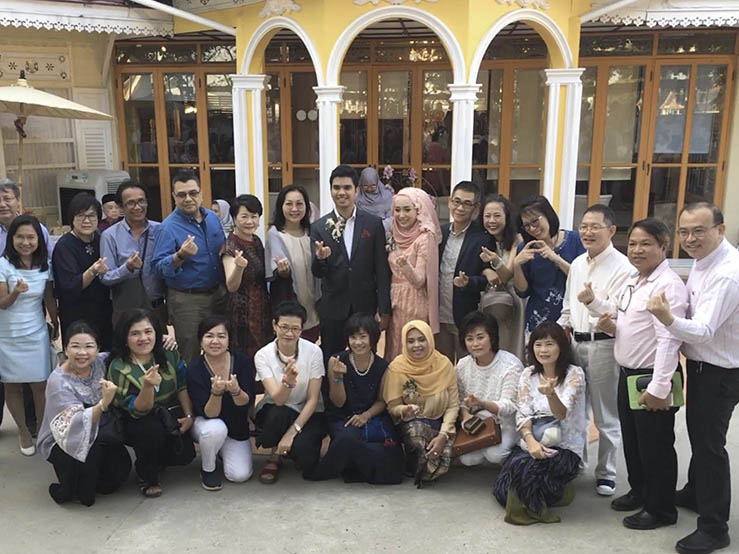 A Muslim Wedding Is Filled With Beauty and Purity

Even though Muslim weddings on the surface may appear to have many conditions and restrictions, at a deeper look – these requirements are all set and based on simplicity following the religion. It is often emphasized that the Muslim bride and groom may marry each other without an excessive wedding or unnecessary add ons. You only have to be faithful and pure to the religion of Islam to be able to host a Muslim wedding which is both beautiful and faithful to the religion. 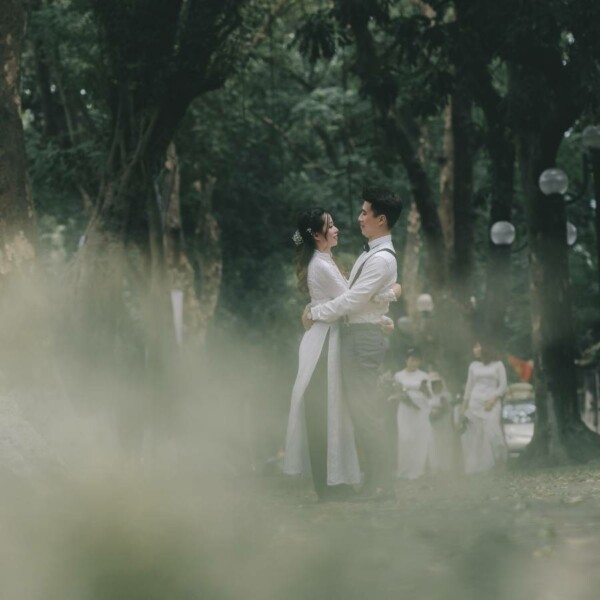 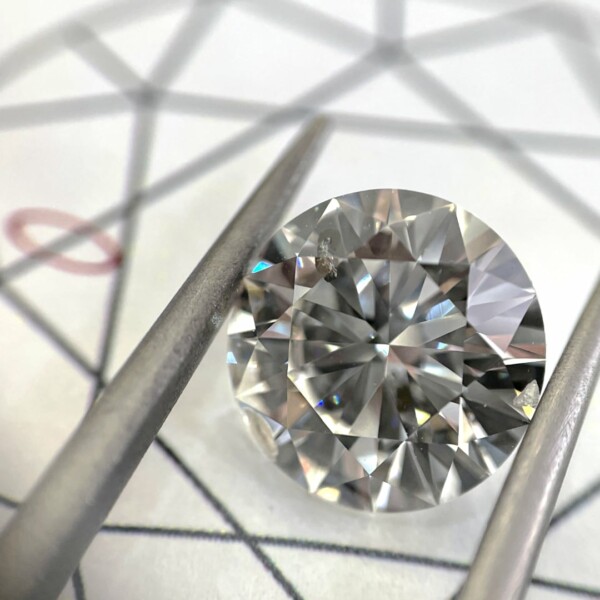 Why not arrange a trip to meet our designers? We’re ready to share our extensive knowledge and offer you a special experience trying on a wide range of pieces.